Amazon founder Jeff Bezos predicts a future where humans will have to leave Earth, with the planet being reserved solely for “residential and light industrial” activities.

And he’s proposed working in partnership with government organisations like NASA to speed up the possibility of creating a permanent settlement on the Moon.

Mr Bezos is the world’s richest person, worth an estimated $176 billion, and in 2000 founded aerospace manufacturing company Blue Origin with the goal of reducing the cost of travel to space.

The American billionaire was last week presented with an award for space settlement advocacy at the Space Development Conference in Los Angeles, and outlined a future where humans will leave Earth for the sake of the planet.

PHOTO: Mr Bezos would like his company to team up with NASA in the future. (Supplied: Blue Origin)

“We’ll come and go, and the people who want to stay, will stay.”

Mr Bezos believes heavy industry will be done in space, with the Moon being the ideal starting point due to solar power and the discovery of ice in permanently shadowed craters at the poles, which could be used for energy.

“The Earth is not a very good place to do heavy industry. It’s convenient for us right now,” Mr Bezos said.

“But in the not-too-distant future — I’m talking decades, maybe 100 years — it’ll start to be easier to do a lot of the things that we currently do on Earth in space, because we’ll have so much energy.”

Blue Origin has designed different spacecraft to reduce the cost of reaching space, creating settlements and also being able to carry humans to the Moon.

The first of these is the spacecraft New Shepard, with a test flight reaching an apogee of 107 kilometres before returning to Earth on April 30. 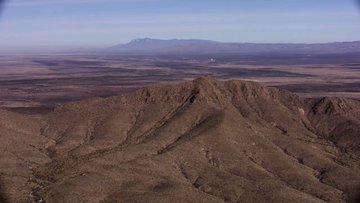 For space settlements, Blue Origin has announced the New Glenn craft which it hopes to start testing in 2020.

The company has also announced plans to build a lunar lander capable of carrying humans and hopes to work in collaboration with NASA.

“We’ll do it eventually. We could do it a lot faster if there was a partnership.”

‘Do you have some oxygen?’

Mr Bezos also said he admires the European Space Agency’s idea for a Moon Village, a collaborative effort among nations and private enterprise for a community on the Moon.

“The Moon Village concept has a nice property in that everybody basically just says, look, everybody builds their own lunar outpost, but let’s do it close to each other,” Mr Bezos said.

“That way, if you need a cup of sugar, you can go over to the European Union lunar outpost and say, ‘I got my powdered eggs, what have you got?’

“Obviously I’m being silly with the eggs, but there will be real things, like, ‘Do you have some oxygen?'”

Mr Bezos is not the only billionaire with his eyes set on settlements in space, with Tesla and SpaceX founder Elon Musk envisaging a colony on Mars.

Mr Bezos said he plans to cash in $US1 billion worth of Amazon stock each year to fund Blue Origin’s ambitions.